With so many choices of different restaurants across Nottingham we're pretty sure your taste buds could travel around the world in a lot less than 80 days in the city although Latin American options are relatively sparse in comparison to the cuisines from the rest of the world.

Last week we visited Las Iguanas Nottingham to sample some of their new menu. Aside from a visit last year to celebrate National Vegan Day it's somewhere that's never really been on our radar however it's very rare that we turn down an opportunity for a blog review so a big thank you to Las Iguanas and Gemini PR for the invite.

Las Iguanas pride themselves in offering the flavours of South America so expect  plenty of variety on the menus. They also offer all of their cocktails as 2 for the price of 1 however there's disappointingly no option to mix and match in that offer so you have to choose something you really really like the sound of instead of taking a chance on something you're not sure of. We'd have liked to have seen the option for different cocktails to allow you to try multiple off the menu to see what's right for you for future.


The Huana Party came in a standard hi-ball glass and looked a little disappointing compared to those others were receiving in some pretty fancy glasses around us. The menu said it contained Beefeater Gin, Huana Guanabana Rum Liquor, Funkin Passionfuit, Bottlegreen Elderflower and Apple though all we really got was the passionfruit flavour. Adding in the elderflower was drowned out by the overpowering passionfruit mix.


For us it seemed that the bar tender or recipe had seriously scrimped on some of the more premium ingredients. (Gin, the Huana Rum Liquor and the Bottlegreen Elderflower). We might as well have been served a bottle of J2O. 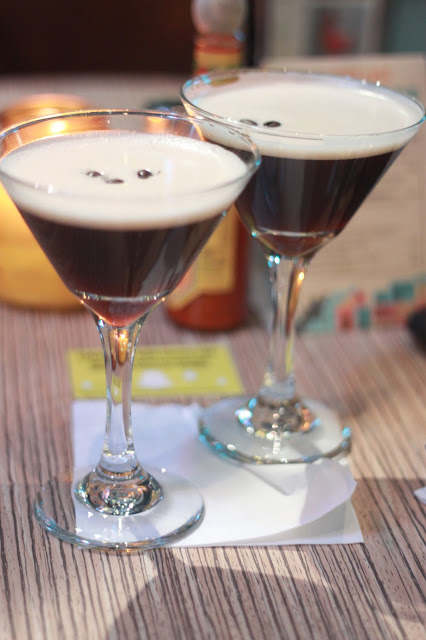 Espresso Martini is my favourite cocktail so I was hoping for big things from Las Iguanas. Sadly what came out was rather flat and lacklustre. I would have been better ordering a Cappuccino and asking them to add a shot of Vodka as the taste was flat and lacking the bite of a good quality espresso and certainly seemingly lacking in Alcohol content.

If you consider Jem had almost four cocktails (I had a few sips from one Espresso Martini before deciding it was arguably one of the worst that I'd tasted across the whole city) and was happy to report that the alcohol level had no effect I think Las Iguanas need to reconsider their measures for at least the cocktails that we had.

Pepper Rocks is currently our go-to place for reasonably priced good quality cocktails so we would recommend a staff outing to show what can be done for significantly less money at a dramatically higher quality.

Albondigas- Patagonian (Argentine) style lamb meatballs with apple mint and parmesan cheese with a tomato sauce with a hint of chilli.

We lovely the meatballs. The dish came with 3 generous sized meatballs. Full of the unique taste that lamb gives which worked well with the spices and Parmesan. The sauce itself with very nice however we think the chef forgot to add any hint of chilli. It had a lovely meatiness from the lamb juices and tasted fresh.

The menu advised it would be served with Ciabatta however ours came with a couple of small slices of french stick style bread which was a disappointment especially as this wasn't nearly enough to soak up the sauce.

Priced at £6.25 we thought this to be a little on the expensive side for what seemed to be a relatively simple dish. It tasted nice and we'd happily eat it again however it was lacked the advertised chilli and ciabatta.

Dadinhos- A Brazilian favourite of crispy cheesy cubes with a sweet chilli jam. These were absolutely amazing cubes of cheesy tapioca fried and sprinkled with a warming rub with a hint of chilli. Great on their own or dipped into the subtle chilli jam accompanying.

A great starter tho I'd have liked to have seen a few more of the cubes on the dish, or for those provided to be somewhat larger. At £5.50 I thought the dish was slightly lacking as a result.

The presentation also brings into question the attention of the server and waiter as the little terracotta container which our jam was served also featured a sizeable chip. You would throw such an item in the bin at home so we would expect the same from a restaurant.


The Seco de Cordero is a Peruvian speciality of slow cooked lamb shank advertised as being in a Golden Ale, Red Wine and Amarillo Chilli sauce. The lamb itself was tender and juicy coming clean off the bone for us.

The sauce was amazing with real oomph from the red wine. It was like a Peruvian version of a Bouguieon sauce (minus the usual beef) and worked well with the lamb however again we were asking ourselves what happened to the chilli as there simply was no element of chilli in the sauce except for a few finely sliced pieces atop the dish.

The lamb was served atop a roasted sweet potato mash which was nice and fluffy although for £17.95 the dish was very sparse. We'd have liked to have seen the waiter come to us with a bowl of seasonal vegetables to go with the dish. Lamb, sauce and sweet potato is pretty poor for the money so we'd really like to see Las Iguanas address the constituents of the dish.

The Argentinians love their steak. Having been to an Argentine Grill on a previous ski trip into the mountains of Andorra and having arguably one of the best steaks I've had with a lovely charred exterior yet beautiful rare meat inside. It's amazing what someone can do cooking outside in the cold and snow to make a real good steak.

My Gaucho Steak from Las Iguanas Nottingham had none of the exterior charring I've previously seen from an Argentine grill though it had a beautiful lattice pattern from the rack. It came out rare just as I would expect to see too and was full of the flavour you'd expect from a good 10oz piece of Sirloin.

The Chimichurri sauce served to complement the steak was however a let down lacking any real addition to the steak. It really lacked a freshness I would expect from a restaurant sauce

And as you can see from the above photograph I was clearly short changed when it came to the very basic Sweet Potato chips. Initially the waiter bought my dish out with Sweet Potato Mash however on returning with my correct order my portion was clearly lacking. Some form of latin american coating might have helped temper the blow however they were really just a simple sweet potato chip.

The sweetcorn puree is a nice touch although do we really need more sugar added alongside the sweetness of the sweet potato. We might have been happier had this been fresh sweetcorn too.


Sadly we left Las Iguanas feeling a little let down on what we had been served. We've been previously and been impressed with the Vegan Menu however our choices on this occasion really didn't hit the standards we would expect in terms of quality and value for money. We really expected more after our previous experience with their Vegan menu.

Sadly what we experienced felt over priced and lacking any real touches to make us want to go back for some time. We often go for a meal and dream of booking a holiday to see what the food was like and as a result Las Iguanas Nottingham genuinely felt like a poor advert for South America if you consider our last Italian meal led to us booking to head out there very soon.


Disclaimer- We were invited to Las Iguanas Nottingham through Gemini PR. Whilst our two courses and 2for1 cocktails were at no cost to us we always adhere to review as if we're paying for the food. The comments above are our true reflections of our experience.
at 21:37