A popular stop on Malta sightseeing tours and a recommendation from the locals is Mdina. The silent city of Mdina is Malta's oldest town and was established by the Phoenicians as the country's first urban settlement which functioned as Malta's capital until it was succeeded by Valletta in 1571.

Mdina is known as the 'Silent City' and you will see very few cars around the settlement due to it's very narrow passageways and just around 400 inhabitants. Mdina offers an atmosphere of relaxed calm and despite it's attractiveness to many tourists it still maintains a charm away from the 'tat' stores seen in the coastal resorts of Bugibba where we stayed.


Having watched a significant amount of Food Network classics like Man V Food and Diners, Drive-In's and Dives recently the knowledge of the arrival of Jim's Smokehouse in Nottingham came at a pretty good time for us after having our appetite wet.

Situated along the main street through Hockley on Goose Gate, It's a little out of the way of the main daytime city centre footfall and with the Hockley area seemingly not it's previous dominant centre for Nottingham's bar culture it does make you question the logic of starting up a new venture in such a location until you stumble across the information that it's the new brainchild of Red Hot Buffet Shack and Rakono on the previous premises. Having never been to either of these places over the years I was able to eat without any preconceptions of what the previous establishments offered.

Having imported an authentic smoker from the USA we were rather intrigued at what would be offered and whether we would have our own Man V Food challenge when the other half and I met up after she'd finished work feeling a little peckish on a Saturday evening.


With a very meat orientated menu we opted for the the BBQ Combo (£14.95) from the menu which was our choice of two barbecue options from the Low 'N' Slow BBQ side of the menu. We opted for the Carolina Pulled Pork and Texas Beef Brisket which came alongside a portion of fries and homemade slaw. To make this more of a meal for two we added a portion of Mac 'N' Cheese and Sweet Potato Fries (£2 each).

Having recently received a couple of bottles of Jack Daniel's Limited Edition Barbecue sauces it only seemed natural to come up with some ideas for winter recipes for the blog. We've concentrated recently more towards local restaurant reviews but we also love creating our own dishes.

With a recent bout of snow to contend with the sauce was definitely primed to create a few 'winter-warmers' with it's rich smokey taste coupled together with an intense Habanero chili kick so I decided on creating a very simple American inspired take on the classic Arrabiata sauce.

Uncovering a Hidden Gem for American Ales and Food

You may not have seen Junkyard Bar, Nottingham on your travels but once you know where it is you're likely to want to go back repeatedly for some hearty American food and an awesome selection of American Beers. With the emergence of Missoula, Jim's Smokehouse and with established classics like Soulville Steakhouse still vying for your hard earned it's refreshing to see that Junkyard offers something more for beer aficionados as opposed to just targeting food lovers.

Junyard's location at the top of the little known Bridlesmith Walk which cuts up from pretty much beside the British Heart Foundation shop on Bridlesmith gate a few doors up from Waterstone's may mean that many won't meander past as part of a regular shopping trip but the location adds a feeling of exclusivity to the bar.

To us the best bit about Junkyard is there beers. A large selection to suit most drinkers' palates. Having tried a selection from light, easy drinking house beers to heavy duty Imperial Stouts and Porters Junkyard offers a selection uncomparable to anywhere else we've come across. Having tasted enough British IPA's to conclude they pretty much all taste soapy it's reassuring to taste a nice black IPA from the USA which really adds a different dimension

What about the food? We popped in on Christmas Eve for a quick drink and bite to eat on the way home and opted for their Charcuterie selection and Mac and Cheese with Arrabiata sauce. Together this worked as a nice lunch although the Mac and Cheese Balls with Arrabiata sauce were the real highlight with a lovely spicy sauce with enough kick to make us want some more.

Saturday Night Out with the Family at the Travellers Rest Nottingham.

Every December we usually head out for a family meal to celebrate my sister-in-law's birthday although this year we've had to bring it forward due to other commitments for us all throughout December. Her choice this year was the pretty local option of the Travellers Rest, on Mapperley Plains which serves hearty pub-grub with a mixed selection to aim to satisfy everyone’s palate.

Part of the Chef and Brewer group, the Travellers Rest has long been a regular choice for us when eating out due to being around a 10 minute drive from home. It’s a 18th century former coaching house with stunning views over Mapperley Plains and down towards Lambley in summer. It's a rustic venue with exposed oak beams, an open plan pub running through into the dining area and some log fires to sit beside on a cold winter’s night

We’ve been visiting the Travellers Rest for years although we’ve had a rather tempestuous relationship with the pub. In reality it was a gastro-pub before anyone even thought of the word. Its location is well out of the way of the populated areas of Arnold and Mapperley yet a short drive away meaning unfortunately there’s always going to have to be a designated driver amongst the party.

We all went for various different things for starters but there were visually two real standouts. Baked Camembert and the Butchers Platter.

The Baked Camembert (£8.29) featured a whole gooey, baked camembert cheese with an accompaniment of dough sticks, lovely fresh chunky bread and a little addition of some ale chutney to add a sourness to the mix. Visually very enticing and served on a large wooden block. The only downside we found was that you needed half a bloomer which always seems the case with starters and Hallam's- There's never enough bread! (With our appetites it won't ruin a main course!)

Even more appealing on the eye and lips was the Butcher’s Platter. Featuring a selection of the best you’d expect to find on a land based menu. Some nice plump sausages, chicken fillets in a spicy crumb, farmhouse pate, and some tender hoisin duck fillet. With some toasted thick doorstep bread and dough sticks. (£10.99)

Main Meals at the Travellers Rest

For our main meals we all went for something different across the menu.

The ½ honey and lemon chicken (£10.49) was lovely and moist with a decent sized portion. (Far better than when we had similar at Bill’s). The honey and chipotle chilli sauce added a little zing, whilst the mix of white and wild rice was well cooked and fluffy.

Having never tried Wagyu (Japanese Cow) Beef before we were intrigued to taste what it’s all about and the Wagyu Burger (£13.49) came looking a good size with our favourite chips- Sweet potato.  The meat itself was dense and hearty although which it tasted exceptionally good it served as heavy going when coupled with some dry prosciutto ham on top. The dryness of the burger definitely made it hard going for such a premium dish


Mum loves her meat of the feathered variety and has a sweet tooth so opted for the Pan-Fried Duck in Cherry Sauce (£13.99) which looked fantastic in the bowl. She had asked the waitress for it pink upon ordering but it came out more medium cooked than had requested. Despite this she did feel it was a fantastic meal and loved the black cherry and red wine sauce.


My option was the Steak Burger with Pulled Pork (£10.99) in a lovely soft brioche bun. Personally my burger was a real let-down. The steak burger was ok but the pulled-pork topping was very much on the dry side and wasn’t falling to pieces easily like you’d expect from some tender slow-cooked pork. The menu stated it would be sticky barbecue and ale pulled-pork but instead I just got some dry pork with some barbecue sauce on the side.

To add to my disappointment my chips were also somewhat undercooked with hard sections to them. I would expect restaurant chips to be nice and fluffy in the middle with a lovely crisp outer and whilst some of the chips made this grade, as a texture eater I felt they really detracted from the meal. I certainly wouldn’t recommend the dish personally if it’s usually cooked how it was for me.


Our final choice for main meal at the Travellers Rest was the Steak and Ale Pie (£9.99) with prime steak in shortcrust pastry and some Bateman’s Ale gravy. Instead of mashed potato Bro opted for chips but he was made than happy with his choice of the pie 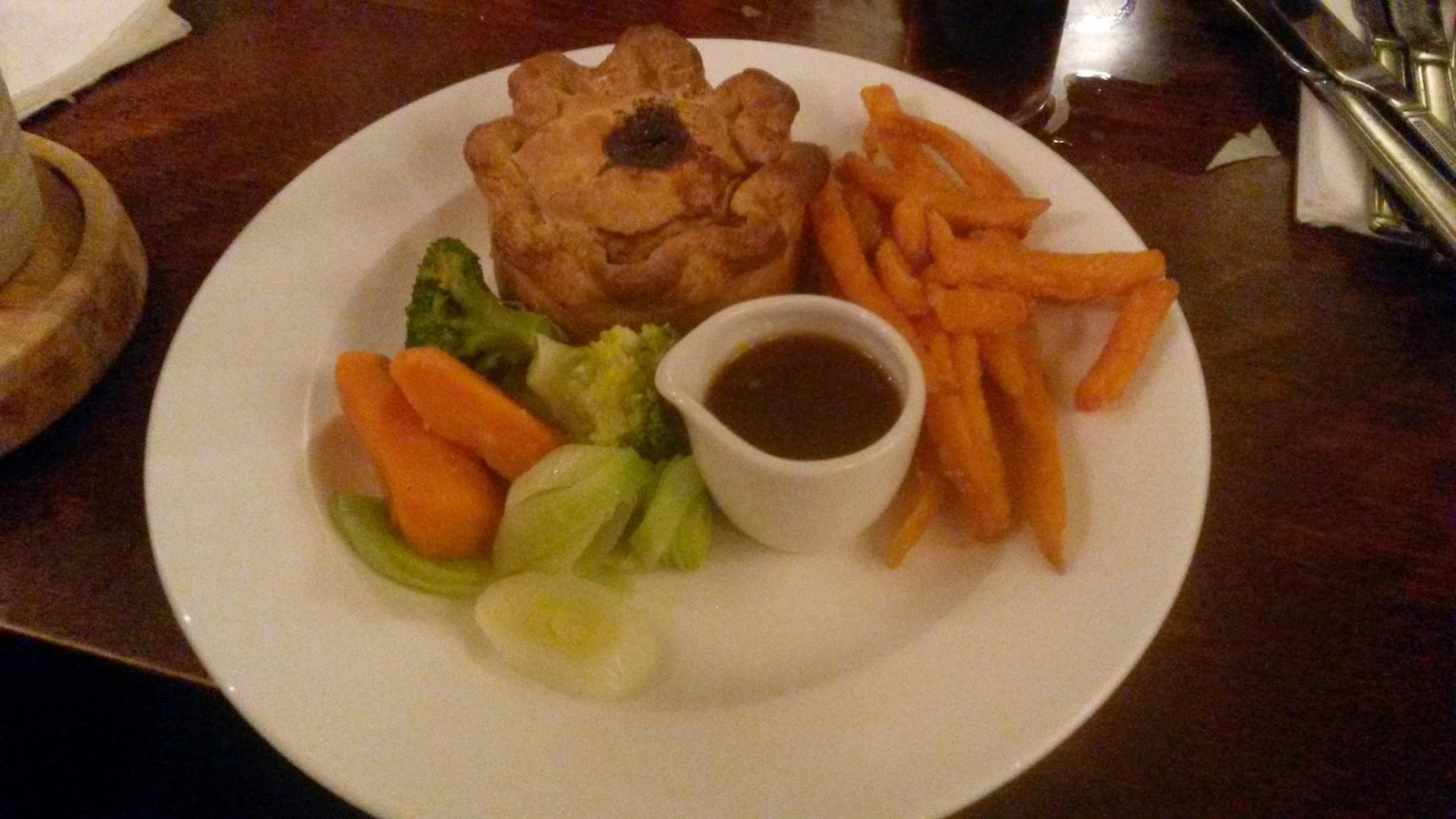 As a family we all have very sweet teeth and love sugar so if we have the option of dessert there's no question on whether we're going to have it or not.

The most enticing looks wise of our desserts selection was the the Oreo Cookie Sandwich (£5.49) which consisted of a chocolate biscuit base and top, with a thick vanilla cream filling which made it definitely a Liam dessert. Sweet and packed full of cream.

My personal choice was a slightly bland tasting Creme Brulee (£4.99) which while not packing the sweetness and creaminess I would have usually liked (It was more like custard than cream) It looked fantastic served in a teacup but it seemed that presentation was more a priority than flavour especially with the added obscenely tiny shortbread biscuits. 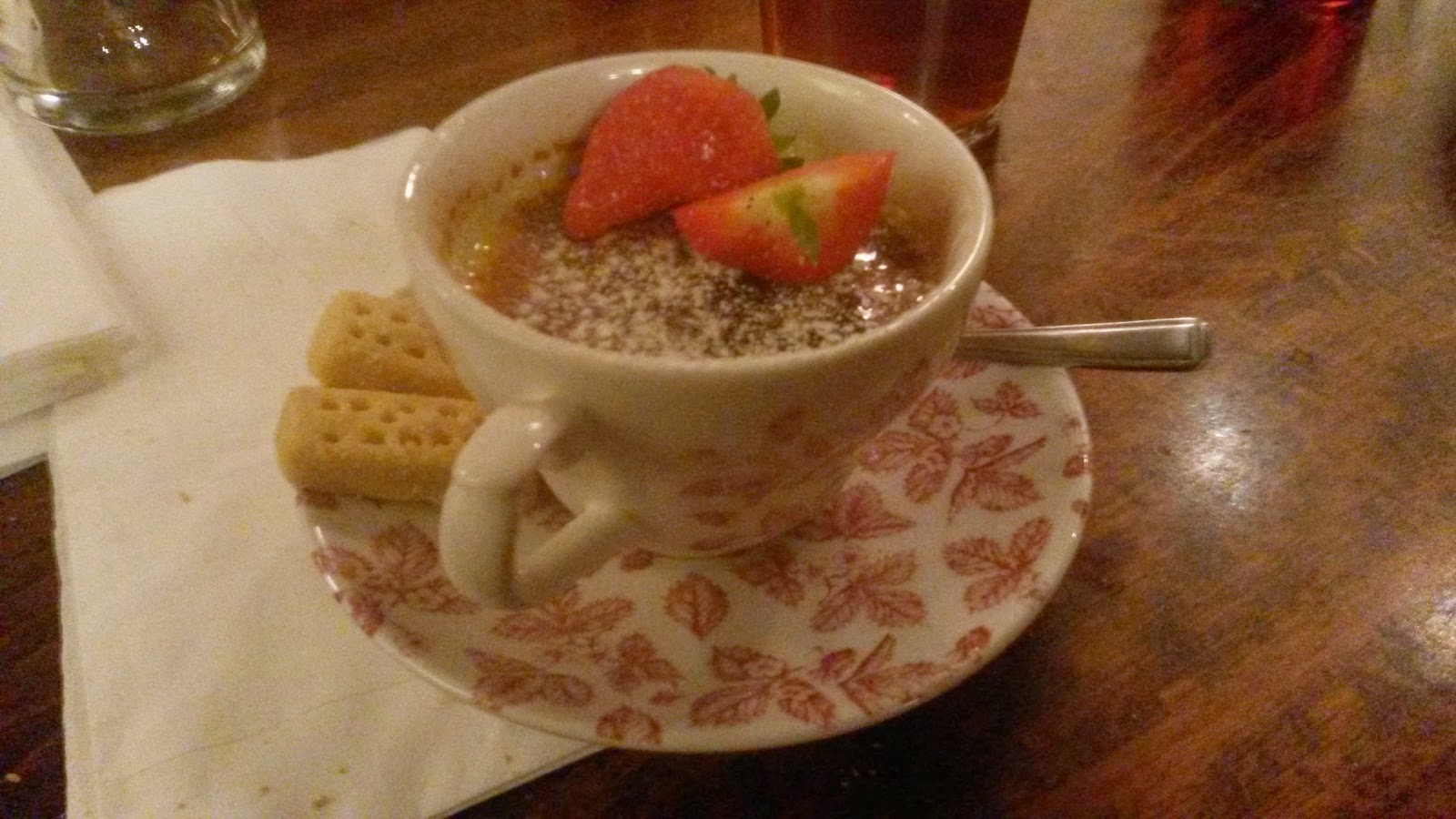 We also sampled the Baked Lemon Cheesecake which was light and easy to eat with more than a hint of lemon. (£4.99)
The sorbet selection also came in a lovely little mug with a beautiful zing.

Have you been to the Travellers Rest, Nottingham? What did you think?