Having been open around 18 months Filthy's Nottingham, originally starting with a gourmet Hot Dog menu their latest reincarnation keeps the dogs on the menu whilst bringing in their own take on some American classics.

Filthy's is situated just off Weekday Cross, opposite the Nottingham Contemporary entrance.


With a retro 80's vibe as a result to walls adjourned with vinyl and various standout posters from the likes of Iron Maiden, Filthy's definitely appeals to the eternal student in many of us. The closure of bars like Reflex and Flares have definitely opened up opportunities for new pretenders on the retro music scene.


The New Menu at Filthy's


The new menu at Filthy's takes a very American approach to eating. With a focus on Hot Dogs, Burgers and mains like Mac and Cheese they've opted for tried and tested options which are very fashionable right now with their own twists on classics.

With Burgers like 'White Men Can't Jerk', featuring a jerk marinated chicken breast or the 'Dhaba' made using onion bhaji patties to create some great sounding alternatives to a regular beef burger there's plenty of variety to choose from.

Filthy's have kept some of their classic Hot Dogs on the menu as well as adding some great chicken wings that we tasted in a fantastic hot sauce.


And with a great selection of Jamjar Cocktails for £4 it's well worth a trip to Filthy's. The food was very nice and there's plenty to choose from drinks wise 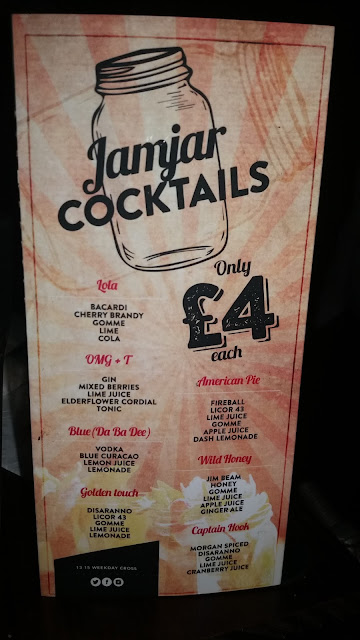