The Lone Male on tour at Bladnoch Distillery

One of my passions when it comes to food and drink is whisky. In particular, I love a good single malt Scotch Whisky and have done so since I first discovered The Glenlivet in my late teens although I've really picked up a passion for tracing the routes of the many distilleries dotted across Scotland in recent years and hope to share some more of my travels in future.

Last weekend saw me head to the Galloway coast although the big draw to the area was a trip to Scotland's most southerly distillery at Bladnoch, just a couple of miles outside of Wigtown. It is one of the few remaining Lowland whisky distilleries still in operation.

After a long lay off from whisky production due to being mothballed by previous owner Diageo. Whisky production recommenced at Bladnoch in 2000 thanks to the new owner Raymond Armstrong. Therefore most of the whiskies on offer now of 12 years old and upwards from Bladnoch are some of the first barrels to be bottled in the distillery's modern day history. They owners have also bought in some of their old barrels too from Bell's so you have the chance to taste the difference too. 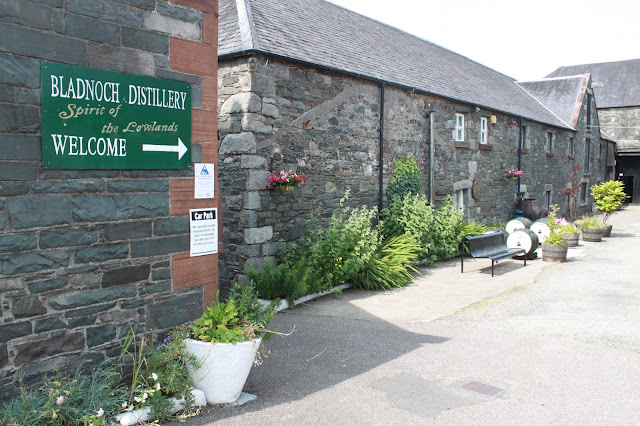 The visitor centre and tour of Bladnoch distillery

If you'd like to have a guided tour of the distillery it will set you back the meagre sum of £3 which is significantly less than many of the other prestigious whisky distillery tours in Scotland I've on. Tours run from midday on the hour and the £3 tour allows you to sample one of the whiskies on offer from the distillery.If you choose to upgrade to the £5 tour you get to sample a further two of Bladnoch's finest which is exceptionally good value for money.

My only reservation from the tour is that I wasn't allowed to take photographs due to being told there was in incident which led to an explosion involving photographs being taken at a previous distillery tour and health and safety now dictated no photographs which is a real shame as most of my previous distillery visits have allowed photographs to be taken. I will have to ask in future when I ring up any distilleries before taking tours to check the lie of the land.

The distillery tour works very differently to many other sites in that we walked through the visitor centre and out to the company's bonded warehouses to see the whisky sleeping and allowing the angels to take their share as around 2% of the liquid in a cask can be lost each year.

The distillery takes it's name from the River Bladnoch which flows alongside although the water used to make the whisky is taken from a couple of miles further upstream.


The important part- Tasting the whisky

One of the best parts about any whisky distillery tour is the tasting. Usually you might get the opportunity to taste one, or potentially two of a distillery's whiskies within the price of a standard tour. I was driving today so plumped for the standard price tour with one tasting although the very friendly and accommodating ladies in the shop made an exception in my case as I was going to pay for the upgraded tour and sample a small amount of what was on offer as I usually find just a small sip can tell me if I really like a whisky.

As part of the tour I decided to firstly sample the standard Bladnoch 10 year old whisky so here are a few of my tasting notes. .


Colour: Honey/ pale straw
Nose: Fresh and lemony with an edge of vanilla.
Palate: A honey glazed flow with a slight oilyness which has elements of smokey tobacco and crushed black pepper.
Finish: Dries quickly after continuing notes of pepper, tobacco and honey.
Overall: A very nice lowland whisky that really has to be savoured. As ideal on a hot summers day as a cold beer and just as satisfying.

Where the whisky sleeps and matures

A brief history of the distillery


If you're looking for a whisky distillery in Galloway or simply a tourist attraction to visit as part of your stay- Look no further.
Find your way to Bladnoch Distillery
Bladnoch Distillery, Bladnoch, Bladnoch Bridge, Wigtown, Wigtownshire, DG8 9AB,
Phone : +44 01988-402235