Having previously fallen in love with Moroccan on a couple of previous visits to Marrakesh and into the High Atlas Mountains, one of the things I really loved on my trip was the food. Moroccan food often involves plenty of spice without the heat of Indian food which creates aromatic and delicately flavoured food.

With a great location in the foodie area of Chapel Bar, Marrakesh is always going to see plenty of people walking past but is a Moroccan  Restaurant worth a visit?

There aren't a lot of options if you're looking for Lebanese or Moroccan food in Nottingham and therefore Marrakesh Restaurant finds itself in a very good position in having no direct competition locally. Nottingham has very few other restaurants which cater for North African and Middle Eastern cuisine. Debsh which specialises in Persian food must be their real competition but with so many other options available in Nottingham and more opening all the time it takes something special or unique to create a successful restaurant in the long term in Nottingham.

The first time the OH and I went to Marrakesh we believe she was the only person in the Restaurant without a headscarf on. It seemed that the people eating were all of Arabic descent to us. We've been plenty of places where we've been the minority but that generally gives us the impression that we're eating where people from the region would eat and therefore they wouldn't visit if the food wasn't up to scratch.

If I go somewhere different I always want to drink something respective of the restaurant so went for a bottle of Almaza Lebanese beer to start off. It was a lovely easy drinking pilsener beer that is very reminiscent of what you'd drink in a hot country. Very light and delicately flavoured. I'd definitely have another in future although at £3.95 a bottle it would be an expensive way to get drunk!

It's rare for me to not have a starter when out but when you're out with friends it sometimes means you have to adhere to what everyone else is having and today it was main meals only.
I went for the Sea Bass which was on the menu at £12.95 and was grilled in a subtle complement of spices and tahini. I love a good piece of fish and this was a pretty amazing whole fish, filleted to perfection and without a single bone. The flesh was lovely and moist whilst the delicate spices really complemented the fish. It was so good that next time I go back to Marrakesh Restaurant I think I would genuinely consider having the same thing again.
One of our friends went for a traditional Moroccan choice of a tagine. Her choice was a fantastic looking chicken tagine featuring potatoes, olives and preserved lemons. Served together with a small plate of couscous this chicken stew was a fantastic choice which would suit anyone new to Moroccan cuisine who doesn't like their food spicy.

The best looking meal ordered to our table was a lamb tagine. We hadn't expected a lamb knuckle to come out as part of the meal but it definitely looked a visual masterpiece. The lamb was so tender it literally fell away from the bone at touch.
Other members of our party ordered a beautifulm tasting chicken dish which was almost a chicken in a herb and tomato stew which I fail to remember the name and as the restaurant's menu dates back to 2012 on their website I'm going to have to go back soon and find out just what it was called.

We had a fantastic, hearty meal at Marrakesh Restaurant Nottingham. It gave me a fantastic reminder of the food I've indulged in on previous trips to the area and really got the OH interested in a potential trip to Morocco in the coming future.

In terms of this review- Would we go back to Marrakesh Restaurant Nottingham? Definitely. We all had a fantastic meal and the lack of knowledge over the options on the menu helped spark conversation in our group. We all sampled some of each others food which often showcases how interesting the food was for us all and how intrigued we were regarding the different flavours.

With so many food options to tempt you into Nottingham City Centre it's always going to be the adventurous diner that would choose Moroccan and Lebanese food over the traditional choices offered by many in town but for those willing to take a chance they'll be rewarded with a great meal. 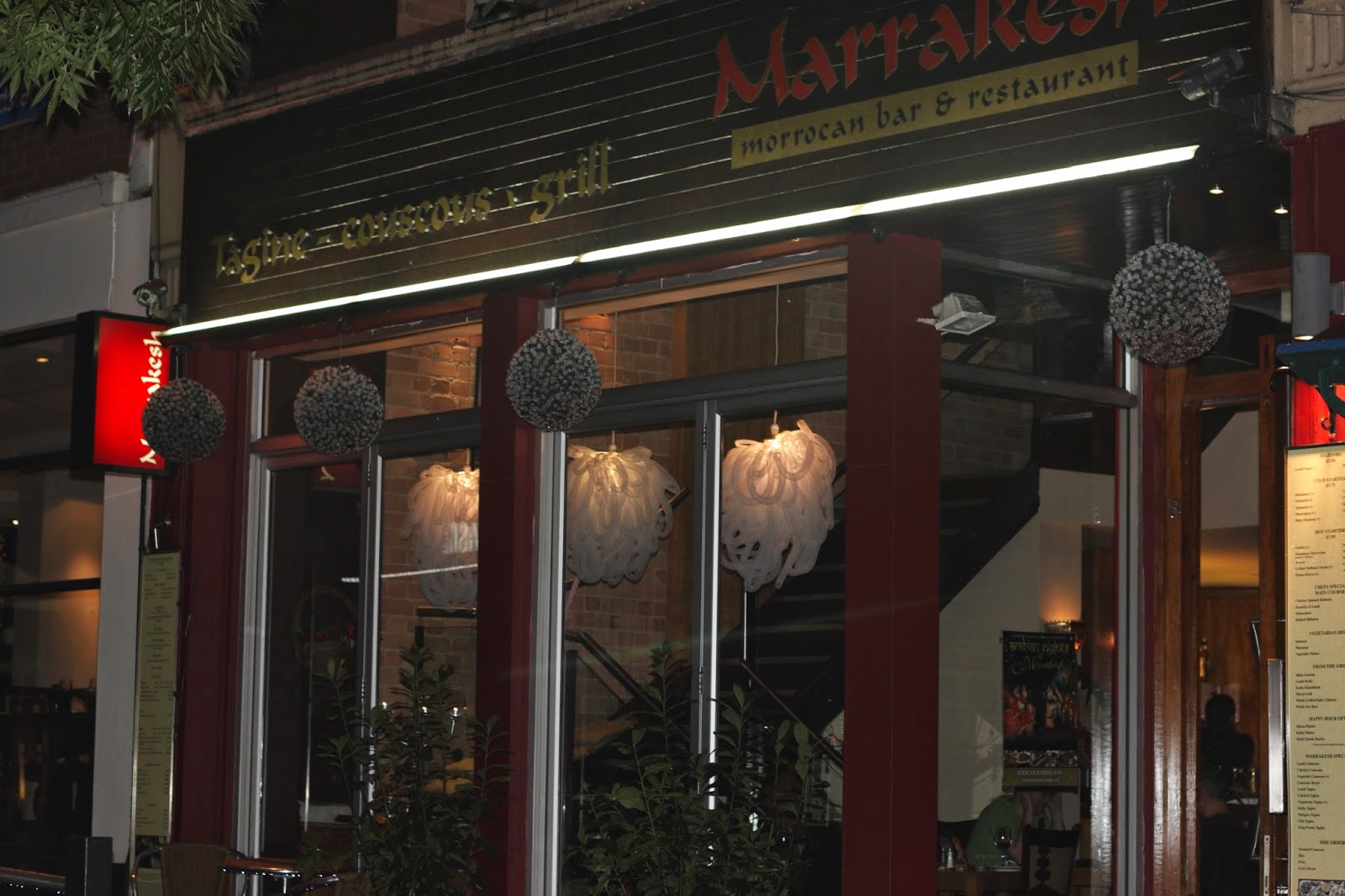